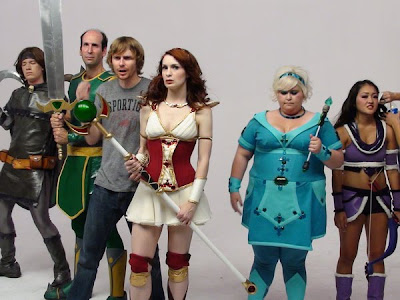 Since I have 1000's of BTS pictures from Season 2 & 3 of The Guild I thought I would start sharing some. So along with the "Don't" picture series I'll be posting the "BTS" picture series as well.

Here is our first one. In this picture Jed Whedon (Director or the Avatar Music Video) stands in for Sandeep who did a flip and unfortunately split his tights. So while he was being sewn up Jed took his place.
Posted by Knights of the Guild Podcast at 9:29 AM