Knights of the Guild : The story of Kenny and Jenni

Kenny Mittleider always wanted to be popular. What he didn’t know was that he would be some day, hosting the Internet podcast Knights of the Guild, the official podcast of the web series The Guild.

Mittleider, in his late thirties, is a post production supervisor in southern California and a huge self-proclaimed geek, with a major Star Wars collection and a sweet, huggable teddy-bear personality.

Both offered their talents to Felicia Day’s web series The Guild crew back in the first run of the off-the-wall comedy about a group of addicted gamers forced to interact offline. Back then, all was funded by PayPal and run by volunteers, with Jenni as Production assistant and Kenny working behind the scenes on featurettes and in post production. Already fans, they became even more hooked while working on the show, with the access to the awesome cast, crew, and fan base that makes up the Guild community.

Thusly, a fan podcast was born.

Powell found herself Mittleider’s partner in crime, and together “Kenny and Jenni” have built quite a name for themselves not only for their excellent coverage of The Guild but for their great repoire and hilarious online personas.

From the first edition, it was clear that this was not your every day fan podcast. With professional quality audio production, show-to-show continuity, and clever lead-ins to each section of their show, Knights of the Guild launched a year ago and became a staple for fans looking for the latest and greatest in goings-on with the Los Angeles-based web series.

Kenny and Jenni make it look easy. What fans don’t see are the hours and hours of preproduction, organizing schedules with cast members for interviews, soliciting and handling fan feedback, dealing with crazy technical difficulties, and spreading the word near and far that goes on behind the scenes.

To both of them I wanted to say bravo and congrats for a year of hilarity, unicorns, one-liners, and insightful cast, fan and crew interviews.

If you are a fan of online gaming, comedy, or social outcasts, and you still haven’t seen The Guild, please quit living under your rock and go to http://www.watchtheguild.com and then check out Kenny and Jenni’s awesome Knights of the Guild podcast at: http://knightsoftheguild.com .

Hours of laughter later, you’ll understand why the podcast has thousands of downloads and the web series is in the top ten comedies on ITunes.

Posted by Knights of the Guild Podcast at 11:00 AM No comments:

Pictures from the Party

Brian Kameoka (Guild Marketing Guru) took some great pictures from last night. you can check them out here... I'll be posting my own person pictures sometime today as well. 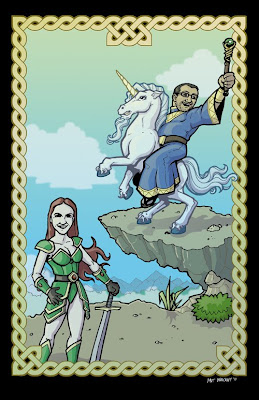 While podcasting Jenni surprised me with a picture that the very talented Matthew Brackney drew.. I totally loved it...
Posted by Knights of the Guild Podcast at 10:56 AM No comments:

1 Year Anniversary Podcast: A Look Back 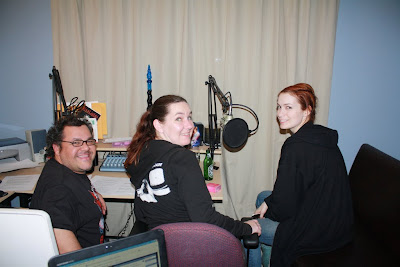 WOW!!!! that pretty much sums up last nights 1 year anniversary party/podcast. First of all there was a 1 hour warm up act with Jared Hoy and Andrew Seely who were on mic because Jenni and I were running around greeting our guests and such. Once we started the podcast it continued for over four hours of guildie goodness. So much great stuff that I think I'm going to break it up into 3 or 4 podcasts. After 11:30 when the party started to break up it turned into the "After-Hours" Karaoke night. Headed up by my best bud Will along with Jay, Meagan, Ray and Jenni they were singing up a storm until 1am.

It was truly and amazing night of friends, podcasting and good times. I would like to thank all our guests for making the trek out of my house (I live in the middle of nowhere). Felicia, Kim, Michele, Brian, Fernie, Andrew, Will, Mel, Jay, Greg, Jared, Sean, Megan and Ray.

It was an awesome night and I wish we did that for every podcast.
Posted by Knights of the Guild Podcast at 10:42 AM No comments:

Today we are recording our 1 year anniversary podcast. We have some great guest lined up Felicia Day, Kim Evey, Greg Aronowitz, Sean Becker, Michele Boyd, Fernando Chien and many more. Starts at 7pm PST on our Ustream channel. It is password protected, password is KOTG. Be sure to stop on by and say hi.
Posted by Knights of the Guild Podcast at 8:39 AM No comments:

The Guild is pleased to announce the release of the Season 3 to DVD and iTunes. On Monday, January 25th, The Guild seasons 1 through 3 will be available for purchase on iTunes. Because of the length of the individual web series episodes, on iTunes they will sell as bundles of 2-3 episodes, each approximately 10 minutes in length.

Seasons 2 and 3 will be available in both standard and high definition, priced at $0.99 per episode bundle (SD) or $1.99 per episode bundle (HD). Season passes are $5.99 (SD) or $9.99 (HD) for seasons 2 and 3. The iTunes contents are episodes only, no DVD bonus features are included with this release, with the exception of the Season 3 bonus feature “Tips on Making a Web Series” which is free on iTunes with the purchase of the season pass.

Downloads are US and Canada only, with a UK release coming soon.

Episode 2: Cheesybeards - Rather Be Raiding

Episode 3: Sacking Up - Blow Out

Episode 2: Player Down - Get it Back!

Episode 6: LAN Off - Hero Tips on Making a Web Series (FREE WITH SEASON)

On Tuesday, February 15th, Season 3 arrives on DVD exclusively on Amazon.com with a retail price of $14.95.

Bonus features on the DVD include “Do You Want to Date My Avatar” Music Video, The Making of “Do You Want to Date My Avatar,” the Halloween episode, Guild Applicant Rejects, How to Build Vork’s Sword, Audio Commentary with the Cast, Audio Commentary with the Creator, Director and Producer, Axis of Anarchy Interviews, Gag Reels, PDF of Script, Play All Feature and English Subtitles. The Amazon.com DVD release comes on two DVD-R discs by Amazon’s Create Space, and is NTSC format, region-free.

Later in the spring, Season 3 will be released to YouTube and to retail stores via a DVD from New Video (with identical content and cover art but on a single disc).

Posted by Geekyfanboy at 5:33 PM No comments:

Well believe it or not we are about to hit our one year anniversary with Episode 13 on Febuaury 15th. To celebrate this special occasion we are planing a LIVE Ustream broadcast of the podcast. Not only will it be live but we will also have some very special guests joining us to co-host. We will have Q&A section where you will be able to ask our guests questions, also we will be having several giveaways. We have several cast members and crew already confirmed as guests. Be sure to stop by and say hi.

Be sure to check out our Ustream channel at http://www.ustream.tv/channel/knights-of-the-guild This site is password protected to keep out the trolls. The current password is KOTG.

The LIVE event will be taking place on Saturday January 30th at 7pm PST.

We have several cast members and crew already confirmed as guests. Be sure to stop by and say hi.

PS.. would love to hear from our listeners. Please send us a written comment or voice message to knightsoftheguild@gmail.com or call 818-308-KOTG (5684) and leave us a message.
Posted by Knights of the Guild Podcast at 5:09 PM No comments:

Knights of the Guild Ep 12 pt1

Here it is Episode 12 part 1 of Knights of the Guild. We hope you enjoy it.

Posted by Knights of the Guild Podcast at 10:14 AM No comments:

Here’s our first “breaking news” minicast. Sometimes we have news that needs to get out there right away and we can’t wait for our regular podcasts so we created these minicast, they will only a few minutes long but will supply you with important Guildie News. Our first one is about The Guild Season 3 DVD. Including the RELEASE DATE!!!

Link to Season 3 DVD on Amazon.com

Posted by Knights of the Guild Podcast at 10:08 PM No comments:

Knights of the Guild Ep11 pt2

Here it is Episode 11 part 2 of Knights of the Guild. We hope you enjoy it.

Posted by Knights of the Guild Podcast at 9:52 AM No comments:


A few weeks back we put a contest call out for listeners to create a “Guild” themed Haiku, Limerick or Poem and boy did you guys deliver, we received 38 entries. Then for one week we had listeners vote for their favorites in each category and on today’s microcast we will announce the winners. Not only will we announce the winners but we will also have every poem, haiku and limerick read aloud.

Some of the writers were able to read their entry out loud but most were not so I put a call out for help and here are the listeners who helped Jenni and I read the remaining entries. Spidra Webster * Derek Reynolds * Caitlin Coyne * Eva * Jerod Bennett Thank you guys for helping us out.

Hope you guys enjoy this Microcast,

Take Him With You

Posted by Knights of the Guild Podcast at 11:25 AM No comments: