Helping with the Podcast Contest 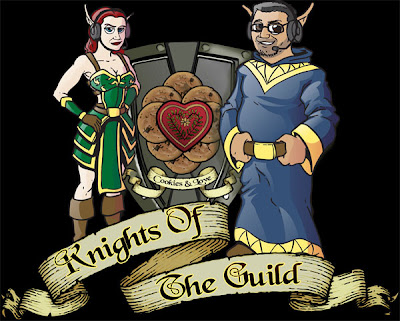 So we are looking for Guildies to help with our podcast. As many of you know we have a section of our podcast called Business Time where we let listeners know where they can find Knights of the Guild on the world wide web.

So to help us out we are asking for listeners to record one or more of the following :
You can record as many of them as you like. If your recording makes it into episode 17 pt1 (June 15) or pt.2 (June 30) will enter your name into a very special contest where we will draw 1 winner who will receive The Guild Comic Book #1 signed by all six cast members.

There aren't many rules, the recoding need to sound good, you can just read them, do a funny voice, sing them, rap them, do anything you want. Please do not add music or any other sfx. You can read them word for word or ad lib just make sure you get the information across. You can send us an MP3, Aiff, or Wav audio file. Email the file to Knightsoftheguild@gmail.com

Please get them into us before the end of May.
Posted by Knights of the Guild Podcast at 4:18 PM 3 comments:

Knights of the Guild Ep 15 pt2

Here it is Episode 15 part 2 of Knights of the Guild. We hope you enjoy it.

Webseries and other show promo’s played during the show this week:

Podcast promo’s played during the show this week:

Posted by Geekyfanboy at 9:07 AM No comments: 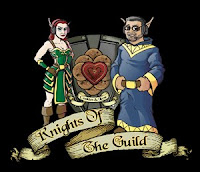 Today I had an interview lined up with a Guild Fan for our upcoming podcast Ep. 15 pt. 2. So at 8pm Jenni and I got on skype with our friend Eva for the interview. It was quick and to the point lasting about 7 minutes.. it was a good though short interview.

After that I did a little editing work on the episode. Earlier that day I had gotten the Sean Becker Guild Something segment and so I cut in both of those segments. So all is left to do is cut in the SFX and do one final pass before I level it, convert it and then upload it.

Gotta start planning to record our next episode.. man for a hobby this takes up alot of my time. :)
Posted by Knights of the Guild Podcast at 11:55 PM No comments:

Knights of the Guild Ep 15 pt1

Webseries Promo’s played during the show this week:

Posted by Knights of the Guild Podcast at 10:49 AM No comments:

Powered by Podbean.com
Well it was officially announced that Microsoft will be sponsoring Season Four of The Guild. Here is the official announcement from WatchtheGuild.com

We’re pleased to announce that Season 4 of The Guild is official – Microsoft has renewed the show for another season and new episodes of The Guild will be coming to Xbox, Zune and PCs this summer.

Felicia is putting the finishing touches on the script for Season 4, which will pick up where Season 3 left off. Pre-production is underway, keeping producer Kim Evey and Streamy Award winning director Sean Becker very busy as cameras are set to roll sometime in May. Seasons 1 through 3 are currently available on watchtheguild.com, iTunes, Amazon and YouTube.

Microsoft has sponsored The Guild since season 2. The Guild thanks Microsoft – along with all the fans – for continued support of the show.

I actually chatted with Felicia Day for a few minutes and tried to squeeze some info out about Season Four.. I wasn’t too successful but I did manage to get a few tibits.. so take a listen to my conversation with Felicia.

Posted by Knights of the Guild Podcast at 11:29 AM No comments:

Tonight after work I rushed home to do an interview with Teal Sherer (Venom). Jenni is still on the east coast and couldn't make the interview so I was doing it solo. Earlier in the week I had tweeted about doing the interview and asked for questions and the listeners really stepped up and sent me a bunch of cool and interesting questions.

I have to say this was on of my favorite interviews that I have done so far for KOTG. Teal is a very sweet and intelligent lady who gave really good honest answers... it flowed so well.

This Microcast covers the Guild’s comic book signing at Golden Apple in Hollywood. It started out as Felicia Day only but soon all six cast members were going to be there to sign. I wanted to do this microcast for all the fans who couldn’t make it. Jenni (my co-host) is on the East coast so I asked a good friend of mine Greg Aronowitz to join me, which he happily did. So we got there around 5 and there was already a line forming. We interviewed some fans who were waiting and then went inside when the event started. Most of the night I was the “muscle” and stood by Felicia and made sure no one went behind the table. It was a very well organized event and everything went very smoothly. After the last person in line (they had to close off the line). I joined in and had my owe comic books signed.. I might work for The Guild but I’m still a fanboy.

Greg and I also did mini interviews with each cast members about the experience and being in a comic book and an interview with the store owner Ryan.

It was a great night, Greg was a super substitute co-host and hopefully this microcast brought the signing to everyone.

Posted by Knights of the Guild Podcast at 7:26 AM No comments:

It looks like The Guild will continue its transmedia dominance after releasing the first of the three-part The Guild comic through Dark Horse with…an animated TV series called Lil Guildies, confirming our earlier report of this mysterious video. Day revealed to Tubefilter that she has inked a deal with a very prominent animation house (we’re not allowed to say due to NDA obligations) to bring to life a Muppet Baby-esque series that shows us what our favorite Guildies would look like as kids.

When first broached with the idea, Day was hesitant due to her already packed schedule of prepping the comics as well as her staring role in the upcoming SyFy series Red but being able to bring The Guild to gamers with kids was too good of an opportunity to pass up. “I love working on the web because I don’t have to compromise creatively,” said Day. “I thought a mainstream kids show for TV would be a disaster in that regard but they kept saying that they loved my sensibility and they really wanted me to do whatever I felt was true to the tone of the web series.” She was able to bring on board several friends of the show to get it made: Greg Aronowitz (prop master for Do You Want to Date My Avatar? and co-creator of the hilarious The Guild Christmas products bonus features) created all the character design and Paul and Storm did the theme song.

An interesting dilemma was how to deal with the fact that the character of Bladezz is so much younger than the rest of his guildmates. The solution seems outlandish but definitely doable considering Day’s willingness to take chances. Says Day: “I never thought for a second that they’d actually approve Embryonic Bladezz but when they did I felt like they passed the creativity litmus test. And I guess cartoons are a lot more progressive now than they were when I was growing up.”

Day also supplied us with the lyrics to the theme song composed by Paul and Storm:

Tink and Clara come a runnin’ on the double again
Zaboo’s sneakin’ up to get a cuddle again
Embryonic Bladezz is makin’ trouble again
And Vork has a monkey, a wah ha ho

Lil Guildies are on the case
Makin’ music and solving crime
And also they’re in outer space
Friends of yours and mine
It’s time for Lil’ Guildies time!

The show definitely won’t be for everyone but just like the old Loony Tunes or Rocky and Bullwinkle, Day tells us, “I’m going to put in lots of stuff that will go right over kids’ heads but that their parents will think is really funny. Hopefully.”

Release dates for the project will be forthcoming.

Posted by Knights of the Guild Podcast at 3:22 PM No comments: