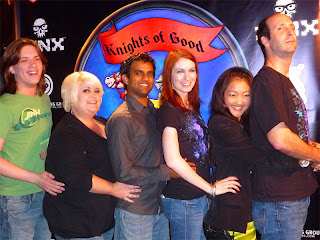 Today was The Guild's Season 4 wrap party. It was being held at a restaurant/bar called Barbarella Bar in Sliverlake. It started at 7pm.

Harry was sick and not really into parties, so I invited my friend Christopher to go with me. I picked him up around 6:30 and got to the party at 7pm. The place was very cool, kind of trendy/industrial. Soon the place was packed. It was fun mingling with the cast and crew. I got tons of pictures which you can see on Facebook or on my Flickr Account . Everyone chatted for a few hour and about 9:15 they gathered everyone in the main room, were there was a large TV screen. There were 3 things listed on the screen, PSA, Guild S3 Recap and Episode 1 of Season 4. I knew they were going to preview episode 1 of season 4 and I was very excited for that. I was excited to see the Recap again but I didn't have a clue what the PSA was.

Felicia and Kim got up and gave a nice speech and thanked everyone for all their hard work. 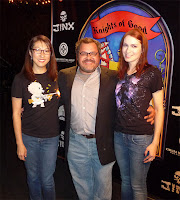 Then they started the DVD. First was the PSA, Come to find out that it involves me and Wil Wheaton.. It was one of the funniest things I had ever seen and it totally made this great night unforgettable.

Afterward people kept asking me if I knew about it, and I could honestly say that I didn't have a clue. I mean Brian mentioned something to me when I arrived but I never expected this. People also asked how it made me feel to know they went through all this work for me. It's hard to put into word how I felt. I love my Guild family and have enjoyed working on the past three seasons with them all. I have dedicated/volunteered alot of my free time to The Guild. I started the official podcast just to get the word out about The Guild and to bridge the cast and crew with the fans, who are some of the best fans around. So I was honored that they appreciated me so much that they went through the trouble to produce this piece. BTW this will be on the season 4 DVD as an Easter Egg.

After that shock they played the Auto-Tuned Guild Recap of Season 3 which was lot of fun to watch on a big screen and with a group of friends.

Then they aired the first episode of Season 4, Of course I can't give any details but it was AWESOME. A great way to start the season.. can't wait to see the rest.

After the screening they had one more video to show.. it was a gag reel for the entire season and it was hilarious. 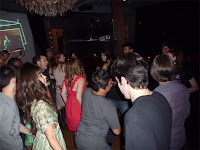 After the video it was dance time. Everyone danced until midnight, then when the final song came on "Don't Stop Believing" the remaining party goers got into a circle on the dance floor with arms around shoulders and sang along with the song. It was the perfect way to end a unforgettable night.

Highlights from the night for me were, of course, the PSA with Wil Wheaton. Dancing with Felicia Day, Sandeep grinding me, hanging out with Maurissa Tancharoen (Whedon) (I've only met 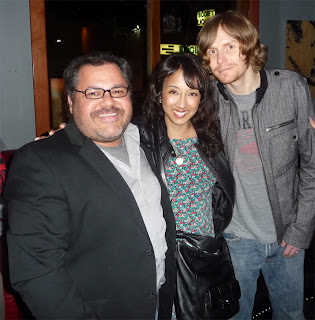 her a few times but she remembers me and my personal life, she asked about my new house.. I love that woman). Watching my friend Christopher mingle and blend right in to the Guild. Just hanging with my friends, that is one great thing about The Guild cast and crew, they are not co-workers.. they are friends. And some of them will be life long friends.
Posted by Geekyfanboy at 11:59 PM