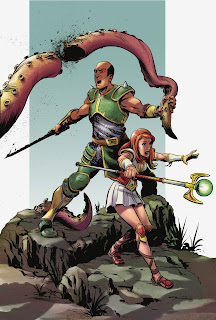 Dark Horse will officially announce at Comic-Con International in San Diego that Felicia Day's "The Guild" is set to return to comics in 2011. Day's popular web-based video series, which entered its fourth season this week, follows the offline adventures of the Knights of Good, a guild within a massively multiplayer online role playing game referred to simply as "The Game," though recognizable as a "World of Warcraft" analogue. Day writes and produces the series, as well as starring as Codex. This year's three-issue "Guild" comic series served as an origin story, both for Codex's gaming life and for the guild as an entity. The sequel series, however, will find each issue focusing on a single character and illustrated by a different artist. The first issue will star noble guild-leader Vork, and is co-written by Jeff Lewis, the actor who portrays him. To find out more, CBR News caught up with Felicia Day, who promised "some fun stuff" for those who attend her Comic-Con panel.

You can read the entire article here
Posted by Geekyfanboy at 5:36 PM