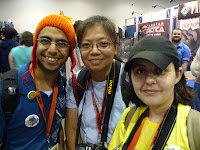 The day didn't start off to well.. our hotel room was super hot and had no air conditioner (That's what I get for going cheap) so I got very little sleep but I was excited for the con. I had already picked up my pass last night so I didn't have to deal with the crowds/lines to get the pass which made me very happy. Ethan and I headed out at 9am and arrived at the convention center around 9:30am. When we entered we went our own ways as Ethan wanted to check out a panel. I headed over to The Guild booth to say hi. I was not scheduled to work. I had a long list of panels that I wanted to see but they were not a priority. When I got to the table one of the guys who was working it wanted to go see our friends (Jared) panel. I too wanted to see it but the crowds were so bad and I was a bit tired so I told him I would stay and watch the table instead and he could go to the panel. Well after the panel they never came back, I assume he did lunch and stuff, by the time he returned it was 2:15 and his shift was over at 2:30 so I said I would stay and wait for the replacement. So I spent from 9:30am to 2:30pm at The Guild booth. It was alot of fun as I got to meet a bunch of Guild fans and a few Knights of the Guild fans. When I was relived I went and had some lunch and decided to walk the dealer room floor. 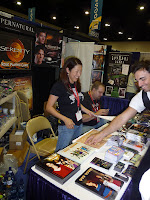 Thursday was so jammed pack it felt like a Saturday. After a few hours of taking pictures and check out the floor I headed back to The Guild booth.. it became a center for the Guild fandom where folks would come together and meet up. It was so crowded there that I wound up staying at the guild booth the rest of the day until 6pm.

Once the hall was closed Ethan and I headed back to the hotel room to get ready for the exclusive Xbox/Guild party. It started at 9:30pm and would go until midnight. We got there a little before 9:30am and because we were within walking distance of the Hard Rock Hotel (where the party was) I decided to drink. Those of you who know me know I'm not a big drinker but this was going to be one exception. So I had a drink and since I was a light weight I got tipsy real quick and to top it off I didn't eat dinner, so the alcohol went right to my head. Of course I had two more drink and was feeling great. I was drunk but not enough to not remember what I did. I was the liaison of "The Guildies" Dani, Jeff, Nas, Luis, Eva and a few others between them and the stars of the Guild. They would ask me to introduce them to Robin or Amy or Felicia. 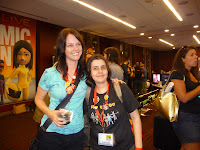 So I spent the night introducing the gang to the Guild cast and others... it was a fun night.. everyone was in a great mood and it was also Sandeeps birthday 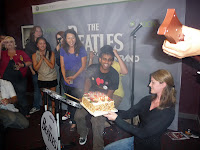 and man he was plastered, even I could tell that. All in all it was a fun start to Con. After the party Ethan and I stumbled our way back to the hotel for some much needed rest.
Posted by Knights of the Guild Podcast at 11:10 PM