Today was the first day that I was scheduled to actually work at The Guild booth. It was also the only day that had a panel that I absolutely wanted to see "V" . Also my good buddy Will was driving in to hang with me the last two days... so I was excited to see him.

So Ethan and I got up and did our normally morning thing, but instead of walking to the convention center we got a taxi. Got to the con around 9:30am. Headed to the The Guild booth. Once I got there Kim we prepping for a signing at the Browncoats booth. So I helped with that. She also informed me that they didn't need me today to work the booth. So instead I helped carry stuff over to the Browncoats table but more important was Felicia Day's bodyguard.. okay not really my since the Browncoats table is all the way on the other side of the hall I was in charge of preventing fans from stopping her as whenever Felicia was out on the floor people would constantly stop her. So with Kim on one side and me on the other we navigated the crowds and got Felicia to the Browncoats table in time and only got stopped a few times. 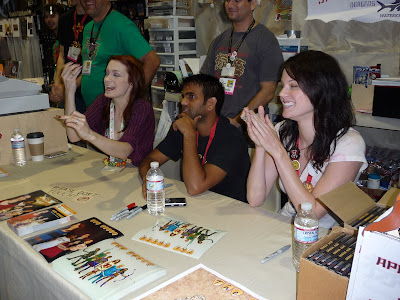 After the signing I took the stuff back to the Guild booth. I should have gotten in line for V now as it was about three hours before the panel but my buddy Will was not here yet and I had his pass and couldn't get into a line because I couldn't get out to give him his pass when he arrived. I also didn't want to wait three hours in line for a panel as I had heard that the line was already super long at this time and there was no guarantee that I would get in anyways. So instead I hooked up with some Guildies, Dani, Eva, Lydia, and Nas and headed out to Cafe Diem for lunch. (Cafe Diem is a fictitious cafe on Eureka that they created in a building down the street from the con.) 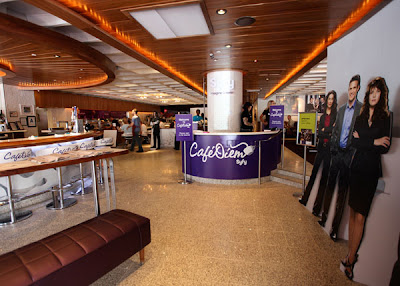 A few more Guildies joined us for lunch, Luis and Fernie. During lunch an old friend of mine just happened to run into me. CJ it was great seeing you, wish would spent more time together. Towards the end of lunch my buddy Will called and said he had arrived. So I directed him to the Cafe and we hooked up.

After lunch I spent the rest of the day with Will roaming around the convention center as this was Will's first Comic Con. We did the floor and he even did a VO panel. We had a great time and Will who I knew was a little geeky turned out to be an even bigger geek then I thought and I love him even more for it. 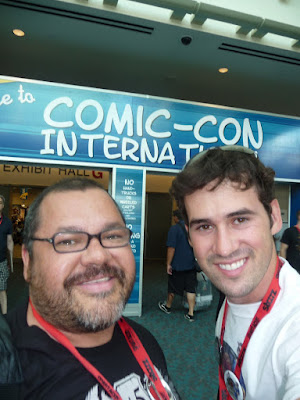 After the floor closed at 7pm Will and I headed upstairs to attend the Legend of Neil panel. Of course there was a line but because I had worked on the show I was able to get Will and I in with the cast and crew so we got some decent seats. We watched the first three episodes of season two and then the panel including Sandeep and Felicia. It was a lot of fun. We then let with a bunch of Guildies and headed down to fifth street to find a place to eat. Every place was so busy and the wait were crazy so we continued to walk further down the road until we got to TGI Friday and was told the wait would be 20 minutes.. well about an hour later we finally sat down for dinner. 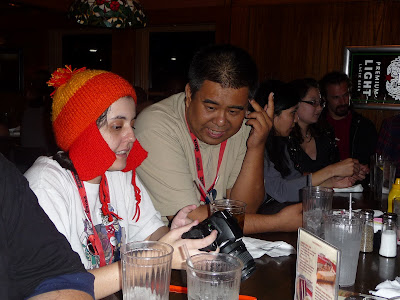 After dinner Will and I went back to his car and drove to the hotel, luckily we found a parking space on the street right behind my jeep. So we parked and went back to the hotel. By this time it was almost 1am and we were tired. We hung out a bit and chatted and waited for Ethan to get back as he was moving to the room next door in with Brian as Will was bunking with me. I think we finally went to bed around 2am and had to be up at 8am to do the final do of Con.
Posted by Knights of the Guild Podcast at 11:12 PM