This was the BIG GUILD DAY... it was the day of the Guild panel and huge announcements were being made. Today I got up and felt pretty good. I got a good five hours sleep and didn't seem to have a hangover. Ethan and I got up and rushed out as we wanted to get to the convention center as The Guild panel was at 10:30am but we knew there would be a line and I have to say we were not disappointed. When I got there I saw Ethan pretty far back in the line but I told him I would see if I could find Dani and the other guildies and sure enough they were about 20 or so folks back from the front so Ethan and I kind of slipped into line with them. I was told I would have a saved seat because I was going to video tape it. So the line went on and on and they finally opened the doors. The Guildies found pretty good seats as I went looking for my assigned seat. I was in the second row right in the middle. I met up with Michele Boyd and her parents, they are very sweet people. I noticed a seat next to Michele's Mom and asked if I could take as I would be front row center, the perfect spot to video the panel from. A few moments later the Whedon clan walked in.. that's right Jed and Maurissa who worked on the music video and next to them the master himself.. Joss Whedon. So I was sitting four seats away from him, I tried to not get all giddy but it was tough. Once everyone was seated the panel started Kim Evey (producer) came out and introduce a very special video that was exclusive to Comic Con. Of course I knew it was The music video but once it started the crowd went crazy. The laughed, clapped, cheered and applauded in all the right places. Once it was over Kim introduced the cast and they all came out in their Avatar outfits with their weapons. 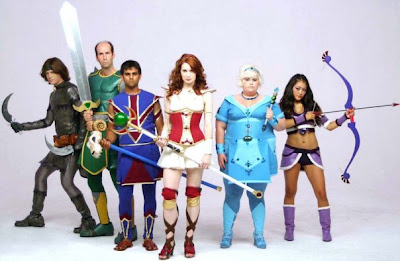 Once the cast was out and seated Kim went on to introduce the world premiere of the first episode of Season Three. Again the crowd ate it up, laughed, cheered and applauded in all the right spaces and then at the very end when the second big surprise was revealed, you could hear the intact of breath from the 500 + attendees. A close up on the face of Wil Wheaton and then a pull out the introduce the rival Guild Axis of Anarchy... then To Be Continued... the crowd went crazy as Kim brought out Wil Wheaton who joined the panel. 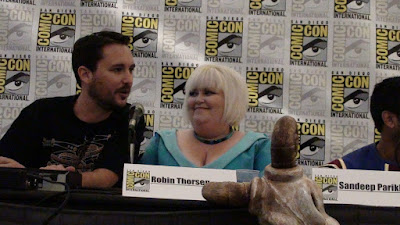 After Wil come out Kim Evey brought up another guy who was with Dark Horse Comic and he announced that The Guild was getting it's own comic book. That is was mainly deal with the lives of The Guild's Avatars in game. Of course the crowd went crazy with excitement. 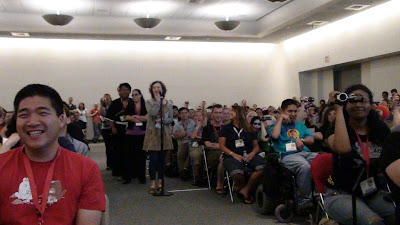 After that they finished the panel with a Q & A where we found out that Jeff Lewis and his wife who were recently married plan on getting married in game. Felicia is trying to level up her priest so she can marry them. The panel finished up and we started to head out. Come to find out that the room we were in only held 500 people and when Kim and Felicia asked for a bigger room they were told that they were just a webseries and didn't need the space. Well we had over 1100 people line up. We could have filled a room double the size and still have to turn people away. Let's hope Comic Con officials took notice.

Today I swore that I would stay away from the Guild Booth as I really wanted to walk the floor. But after the panel I decided to head over to the booth and glad I did as it was pretty busy and it was being maned by just one person. So I helped out a bit until it slowed down. I then grabbed some lunch from the cafe in the hall. It's convenient but costs lots of money. After lunch I finally was able to walk around the floor and take pictures of folks in costume and see all the cool stuff coming out next year. I also got to meet a Treks in Sci fi online friend that I have talked to for years her name is Desi and even though we didn't get to spend a ton of time together she was very sweet and a pleasure to talk to. I still didn't do any panels and when the hall closed at 7pm Ethan and I went back to Nicky Rottens for some dinner. Ethan being young wanted to go out and party. But I had been out past midnight the past few nights and even though I had been invited to an exclusive Roddenberry/Star Trek party and Jinx party I decided instead to head back to the hotel for some much needed rest. A few hours later Ethan showed up as the Jinx party was hot and crowded. We hung out and chatted for a bit before heading to bed.

This was a huge day for The Guild and I was happy to be part of it.
Posted by Knights of the Guild Podcast at 11:11 PM