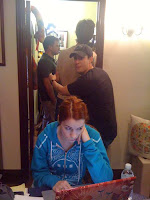 Back on March 17th, 2010 I had a meeting/lunch with Kim Evey who is the co-producer of The Guild webseries. I have worked/volunteered on The Guild the past two seasons, seasons 2 and 3. My primary duties were filming behind the scenes footage and at a later date cutting the footage and creating some DVD extras. I also took still photos and helped out where ever I could.

I got bad and then good news.. Bad news: they have not asked me back to film the behind the scenes material for the DVD. Good news: They want to expand Knights of the Guild podcast to include live set interviews. Besides it's regular podcasts, Knights of the Guild will also release companion piece to the webseries. When they release new episodes we will release a 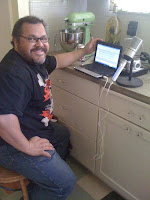 I'm sad that I won't be doing BTS anymore but excited to take Knights of the Guild to a whole new level.

First day was a lot of fun, of course I can't say much about it other then I got some good BTS interviews and I can't wait to get started on these special G4 (Guild Season 4) episodes.
Posted by Geekyfanboy at 11:51 PM